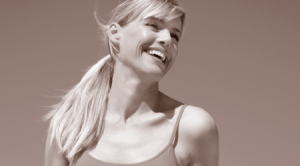 Situation:
Patient is a 40 year old female runner with chronic knee pain diagnosed as “IT band friction” syndrome. For years, she would have pain on the outside of her knee during and after running. She underwent physical therapy which mainly treated her knee joint with modalities and quadriceps strengthening and IT band stretching. When she was referred to me, she had already undergone an arthroscopic surgery which revealed no internal problems with her knee. She was still having a lot of pain and significant swelling after the surgery.

Action:
The patient’s overall posture and pelvic alignment were evaluated and treated first. It was found that she had a rotation of the pelvis that was affecting her lower body mechanics. After treating that with manual therapy, a thorough analysis of her gait was performed. She was then given home exercises to strengthen muscles around her hips and spine to support her in a better body alignment. In the clinic we progressed with a Pilates-based rehab exercise program to improve lower body alignment and core stability and simulate her mechanics needed for running.

Results:
The patient recovered very well and was able to return to running without knee pain. She continues her post rehab work with regular Pilates classes for fitness and injury prevention.