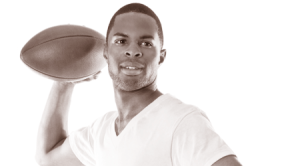 Situation:
A 28-year-old professional football player with a 10-year history of chronic ankle and knee pain presents with a three-month history of Achilles tendonitis. He has had no relief with conservative treatments in the training room, so the trainer referred him to me to evaluate and treat with physical therapy. Outside of this acute problem, he had constant daily pain that he just worked through and severe pain after his games for several days.

Upon subjective history, it was revealed the patient had suffered a fracture of the first toe in college that was treated with only immobilization. He then suffered recurrent lateral ankle sprains and medial knee pain. His Achilles presented as extremely tender to touch and he had lost good dorsal glide of his talus so his ankle motion was very restricted. He also had severe over pronation of both feet and internally rotated hips. He also had several arthroscopic procedures to clean up the ankle joint over the years.

Action:
A series of joint mobilizations to the ankle joint to restore ankle motion were performed as well as myofascial release to the calf muscles to relieve tension off the Achilles tendon. We also addressed improving his hip strength and flexibility. He started a Pilates program to work on proper alignment of his foot and ankle as well as flexibility of his calf muscles. We progressed to more advanced work on the Pilates equipment to simulate actions he would perform for football.

Results:
The patient was able to recover and return to full football activities. He no longer had the chronic pain issues in his foot, ankle and knees. He maintained a regular Pilates program on his own and had a very successful season the next season. He was able to play a few years longer than anticipated because he was able to stay healthy.